Anyone who reads my posts knows how much I love Evander Kane for fantasy hockey.  You’re probably sick of me writing about him at this point.  Well, I’m leading off with him again today because of the following: a) He had three more points on Thursday night (2+1, 3 SOG), b) nobody else went off because Nino and I just led off with him, c) I watched the entire Sabres game to see Kane’s impact, and d) there is no D.  Well, there is, watch Dwight Howard and Dennis Schroeder joke about it but not in regards to this point.  Anyways, you guys know what to do with Kane at this point.  For those who are new here, pick him up and play him!  It’s an excellent combination of goals, shots and penalty minutes at the moment.  And the best part for me is, he helped me win a trip to California in March to see my Sabres! 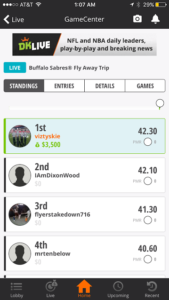 Here’s what else happened over the last two nights before the All-Star break:

Frederik Andersen – 22 save shutout in the 2-0 win over the Red Wings.  Andersen has back to back shutouts but Babcock rested him on Thursday.  Nothing like cooling your own goalie off!  Andersen has been a solid #2 this season and should be a bottom end #1 next year with Toronto on the rise.

William Nylander – Goal on ten shots with two PIM over two games.  The shots are up a ton the last couple weeks which is encouraging to see.  He’ll be borderline top 100 next season, probably sneaking right inside it.  He won’t be 21 until May so Nylander is nowhere near his ceiling.

Steve Mason – 34 save shutout in the 2-0 win over the Rangers.  There’s a ton of upside in Mason, we saw it over a month stretch, but the consistency is, shall we say, lacking.

Wayne Simmonds – Two goals on six shots over two games.  He was ice cold for two weeks but now Simmonds has a goal in three straight.  No reason at all to worry about him.

Jakub Voracek – Goal and an assist with five shots.  He was finally put back on the top line on Thursday night and while Voracek didn’t score, it’s the best thing for him and the Flyers going forward.

Michal Neuvirth – 27 saves on 28 shots in the 2-1 win over the Maple Leafs on Thursday.  See Mason, Steve or any other Flyers goalie for the past decade plus.

Calvin Pickard – 38 saves on 41 shots in the 3-2 loss to the Canucks.  I don’t care about Colorado goalies and you probably shouldn’t either but if you’re in a super deep league, Pickard will be the main man now with Semyon Varlamov out for the season.

Cam Talbot – 26 save shutout in Anaheim Wednesday, 32 saves on 33 shots in the 4-1 win over the Sharks on Thursday.  I’d have to put Talbot as a fairly clear #1 goalie at this point going forward.  He’s older than you think (29) but should be a top goalie in dynasties going forward.

Leon Draisaitl – Two goals and two assists with five shots over two games.  Five game point streak now for the German wunderkind that almost puts him in the top ten in scoring.  Kid is a monster.

Connor McDavid – Goal and two assists with two shots.  Six game point streak for McJesus.  Get those shots up!

Andrej Sekera – Two goals and an assist with six shots.  Well then, Sekera has played his way back into hold status with these games.  His time on the first power play unit seals any debate.

Justin Schultz – Goal and an assist with three shots.  I certainly didn’t see top 5 fantasy defenseman Justin Schultz coming.  I would still sell high, especially if you’re at the top of your league and you’re setting up for the playoffs.  I can also guarantee I’ll be the lowest on him everywhere next season.

Brad Marchand – Two goals on four shots.  It bugs me a bit that he’s become this good at the game we all love.  I don’t know how he avoided suspension for that slewfoot.

David Pastrnak – Two assists with three shots and two PIM.  It appears this line is as good as it gets in the entire NHL.

Andre Burakovsky – Goal and an assist with two shots.  He’s a must-own right now while he’s this hot.

Evgeny Kuznetsov – Two goals on eight shots.  It’s amazing that Kuznetsov is on a 65 point pace now after his horrific start.

Dmitry Orlov – Two assists with three shots.  It sounds like John Carlson will be back after the All-Star break so I’m hesitant to go and grab Orlov.  The majority of his value comes from the change in his role.

Alex Ovechkin – Goal and an assist with four shots.  This team is absurd right now outside of the one random egg against the Senators.

Thomas Greiss – 21 saves on 22 shots in the 3-1 win over Montreal.  The Islanders are back in the playoff race and it’s no surprise it’s on the shoulders of Greiss.  Capuano dug his own grave keeping him on the bench.  If for some reason he’s still available in your league, get him now.

Andrew Ladd – Two goals on three shots.  Is it bad that his first really good game of the season came in game 44?  Just a little bit and by a little bit I mean that’s atrocious.

Nick Leddy – Two assists with two shots.  Leddy is on fire right now solidifying himself as a hold at the moment.

Anders Lee – Assist with six shots and two PIM.  He remains right on the fringe and depends on team needs.

John Tavares – Two assists with five shots.  There are very few players who are playing better than Tavares right now.

Peter Budaj – 22 save shutout in the 3-0 win over Carolina.  The Kings haven’t missed a beat all year with Budaj in net.  Yes, you can call that a cheap shot at Jonathan Quick but Budaj has been better than Quick has been the vast majority of his career.

Anze Kopitar – Assist with two shots and two PIM.  He’s not fully back like his partners on the struggle bus Bergeron and Kuznetsov are but there have been signs of life from the Slovenian.

Johnny Gaudreau – Goal and an assist with three shots.  He has a long way to go to meet most people’s preseason expectations.  /checks FantasyPros, nods in approval of my ranking

Sean Monahan – Goal on three shots.  Just a ridiculous between the legs goal for Mr. Boring.  Relative to my expectations, Monahan has been a big disappointment this season.

Andrei Vasilevskiy – 35 saves on 37 shots in the 2-1 OT loss to Florida.  Just when it looks like he’s dead, Vasilevskiy rises up Undertaker style.  That’s four strong starts in a row so I feel comfortable using him again.

Jussi Jokinen – Goal and an assist with five shots and two PIM.  Speaking of disappointments… Jussi Jokinen, come on down!  He’s a bottom end streamer at this point.

Vincent Trocheck – Shorthanded assist with five shots.  What a monster he’s been for the last month and it’s not going to slow down.

Keith Yandle – Two assists with three shots and two PIM.  While Yandle hasn’t been great in most categories, 40 assists are a distinct possibility.

Seth Jones – Two assists and five shots.  Revenge game!  Back to back five shot games is kind of a big deal for Jones.  There’s a real chance he finally breaks out next season.

Zach Werenski – Goal and an assist.  He’s slowed down quite a bit after his torrid start but you’ve already received incredible value from Werenski.  I’d still be holding tight without hesitation.

Mattias Ekholm – Two assists with three shots playing almost 29 minutes.  He just doesn’t do enough across the board right now to hold him.

Mike Fisher – Two assists with two shots.  Fisher has been a huge surprise this year with 31 points and 40 PIM already.  I’d probably be holding him right now.

Craig Smith – Two goals on three shots.  The shot rate has completely fallen off a cliff for Smith relegating him to bottom end streamer.

P.K. Subban – Assist with five shots.  I’m expecting Subban to take off after the All-Star break.  Maybe his owner is fed up with him and you can buy low?

Mikael Granlund – Goal and an assist with four shots.  Alright, this is getting ridiculous now.  Ten game point streak for the Finn who already tied his career high in points in game 49.  Call Granlund the post-post-post hype breakout!

Andrew Copp – Goal and an assist.  That’s five points in five games for Copp who has stayed in the top six despite the next guy returning.  I’ll probably be streaming him on Tuesday.

Patrik Laine – Goal and an assist with six shots.  He remains pretty good at hockey after the concussion.

Bryan Little – Goal and an assist with two shots.  Little is on a massive heater right now with nine points in the last five.  He’s clear as day must own right now.

Jacob Trouba – Two assists with six shots.  Anyone who grabbed Trouba after he ended his holdout raise your hand!  We are starting to see the offense come together and I think we see a full fledged breakout next season.

Blake Wheeler – Assist with four shots and two PIM.  Mr. Consistency does his thing once again.

Connor Hellebuyck – 38 saves on 41 shots in the 5-3 win over the Blackhawks.  I still love him in dynasties and I still kind of expect him to get the most starts for the Jets ROS.

Duncan Keith – Goal on four shots.  The shots are up a ton lately (18 in last 4) which is extremely encouraging.  That gives him a chance to end up a bottom end #1D the way this season is going but I still think he’s a top #2.

Jamie Benn – Goal on six shots.  He dominated throughout this game and gives me hope that he takes off in the stretch run.

Patrick Sharp – Two goals on five shots with two PIM.  Sharp seems to be thriving carrying the third line for the Stars, similarly to what Evander Kane is doing for Buffalo.  I hope they keep him in that role and let him be the primary shooter, let the play go through him.

Mike Smith – 19 save shutout in the 3-0 win over the Canucks.  The Canucks didn’t have a shot for over 28 minutes at one point in this game.  Seriously.  Smith is a hot schmotato once again but just remember you’re dancing with the devil playing him.

Alex Burmistrov – Goal on two shots.  He’s averaging a point per game since being claimed by the Coyotes.  There could be something here as a streamer going forward and while I’m not sure he ever reaches being a hold in 12’ers, there’s enough upside to be held in 16’ers and deeper eventually.

That’s all for now guys.  With no games until next Tuesday, my next set of daily notes won’t be until next Wednesday.  My plan, as discussed on the podcast, is to write a piece looking at the schedules for every team during head to head playoffs so you can plan ahead.  Look for that to drop Monday.  As always, feel free to ask any questions or leave any comments below.  Thanks for reading, enjoy your weekend, take care!