The new goalie for the Bruins is the one that’s been in for the last decade.  Tuukka Rask made his season debut on Thursday, saving 25 of 27 shots in the 3-2 win over the Flyers.  Somehow Rask is available in over 65% of leagues still, so if you’re in one of them, grab him immediately.  He didn’t receive a ton of volume even in his prime, but I’d expect him to get 50-60% of the starts going forward which is definitely worth holding.  Linus Ullmark, who saved 24 of 25 shots on Wednesday, should receive the rest of the starts.  That’s still enough for me to hold him as they should be quality starts now that Boston has turned the corner.  Jeremy Swayman was sent to the AHL since he doesn’t have to clear waivers, so he can be cut in all formats.  Let’s take a look at what else happened over the last two nights:

Curtis Lazar – Two goals and an assist with four shots over two games.  Easy pass barring a bunch of injuries on Boston.

David Pastrnak – Three shots on Wednesday, hat trick on eight shots with four PIM on Thursday.  Pasta now has seven goals in the past four games after nine goals in the first 30.  That’s the Pasta we know and love.

Joe Pavelski – Two goals and three assists with four shots.  Good lord.  Seattle had no chance with Dallas’ top line with Roope Hintz scoring a goal and an assist adding three shots and two PIM, while Jason Robertson scored a goal and an assist with three shots.  Pavelski and Robertson are over a point per game while Hintz is inching closer.  They’re one of the best lines in the league and are never in the discussion.

Karel Vejmelka – 45 saves on 46 shots in the 2-1 win over the Maple Leafs.  Talk about stealing a game.  Vejmelka has four wins in 20 starts this season.  Three of them are a 46 save shutout in a 1-0 win over the Jets, a 2-1 win over the Kings saving 37 of 38, and this one.  Pretty incredible that he has this kind of upside in a game to stand on his head.  Too bad Arizona is going to be bad for a while so the downside is too much to balance these tremendous starts.

Ryan Dzingel – Two goals.  Dzingel was very good three seasons ago in Ottawa, but since then, he’s been a disappointment everywhere. There’s no fantasy value here anymore.

Aaron Dell – 29 saves on 30 shots in the 4-1 win over the Predators.  Dell is going to get the starts in the short term with UPL week to week and Subban month to month.  He’s been atrocious until today so I don’t want anything to do with him.

Kyle Okposo – Two assists with three shots.  Okposo is actually on PP1 and has been decent enough all season so I’m bumping him up to a middling streamer.

Jeff Skinner – Two goals on five shots with four PIM.  Skinner is playing at a 30 goal pace with three shots per game, but I still only have him as an elite streamer because the assists are quite bad.

Keith Yandle – Two assists.  Even though he’s still on the first power play unit, I have no interest in Yandle since he gives nothing else.

Cam Atkinson – Goal and an assist with four shots.  The season has been a disaster for the Flyers, but at least they nailed the Atkinson trade.  He’s been great and is an easy hold.

Elvis Merzlikins – 31 save shutout in the 6-0 win over the Hurricanes.  The numbers are rough for Elvis because of the change in style for Columbus, but the wins are surprisingly good and the save percentage isn’t a trainwreck.  The GAA is quite bad, but there’s still enough here to be a #2.

Jack Roslovic – Goal and an assist with two shots.  Roslovic has taken a massive step back after quite the season in Columbus after the trade last season.  For now, he’s only a bottom end streamer.

Jake Bean – Two assists with two shots.  I really liked the trade to acquire Bean, and there’s plenty of long term upside here, but for now, he’s a deep league only guy.

Emil Bemstrom – Goal and an assist with two shots.  Bemstrom has just returned from injury and should be left on the waiver wire until we see if he’s been better than in the past or not.

Eric Robinson – Two assists with two shots and two PIM.  Robinson’s speed is a constant factor, but he’s never had the consistent minutes to see what he can do in a bigger role.  That leaves him as a guy with little fantasy value.

Yegor Chinakhov – Two goals on three shots.  He’s still only 20 years old, but Chiankhov has done very little as a rookie.  No thanks for now.

Tyler Motte – Goal and an assist, as did Matthew Highmore.  The fourth line is on a decent roll for Vancouver, but don’t even think about it for fantasy.

Connor Hellebuyck – 33 save shutout in the 3-0 win over the Red Wings.  Hellebuyck hasn’t been at his usual level, but it only takes a couple games to get back to that level.  I’m still very bullish on him going forward.

Andrew Copp – Two goals on four shots.  He bumped onto the first line during the game and has already been on the first power play unit.  That puts Copp firmly on the fringe; I lean towards elite streamer.

Kyle Connor – Goal and an assist with seven shots.  Connor is well over four shots per game now and is on pace for over 50+40.  Pretty damn good.

Zach Parise – Two assists.  Complete afterthought at this point in his career.

Josh Bailey – Goal and an assist with two shots.  Bailey is under a shot per game and the points haven’t been nearly as good as in the past.  Bottom end streamer at best.

Ville Husso – 31 saves on 32 shots in the 2-1 win over the Kraken.  Husso was a quality prospect, struggled in the AHL and then the Blues last season, and now he’s been very good.  Yes, nine games is a small sample size, but Husso is worth streaming in all but the worst matchups right now.

Erik Gustafsson – Two assists with a shot.  Gustafsson is a great add in the short term with Jones out.  He played over 22 minutes out of desperation, including on the top power play unit.  It’ll be almost all assists and PPP, but that has value.

Matt Murray – 27 saves on 28 shots in the 4-1 win over the Flames.  This was his first great start since October.  Murray is a clear desperation play.

Nick Paul – Two goals on five shots.  With Ottawa missing a bunch of other guys, Paul, Alex Formenton (2A, 2 SOG) and Connor Brown (1+1, 4 SOG) played 18+ minutes each.  I’m a big fan of Formenton’s ability and think he’s a solid streamer with these minutes.  All three of these guys are viable options for streaming, especially with Edmonton next on the schedule.

Anze Kopitar – Two goals and an assist with three shots.  Kopitar gets a brutal matchup against the Crosby line and still thrives.  His drop off just hasn’t happened.

Sean Durzi – Goal and two assists with two shots.  Durzi has some upside long term, but right now, he’s stuck in a secondary role.  I like him in deep leagues, but unless he gets PP1, he looks like a guy just outside of 12’er value.  Welcome to the Razzball Database!

Trevor Moore – Two assists with four shots.  Moore is on an incredible run right now with nine points in the past five games.  The shot rate is taking a massive jump up as well.  I think he’s a middling streamer in general, but in this moment, I have him as an elite one while he’s a hot schmotato.

Chris Kreider – Two goals on six shots.  Just an incredible season from Kreider who is going to smash his previous career high in goals.  Absolute force with his speed combined with ability in front of the net.

Igor Shesterkin – 37 save shutout in the 3-0 win over the Sharks.  Needless to say, Prince Igor didn’t have any rust.  He’s as good as it gets right now.  Just stay healthy!

That’s all for now guys.  I’ll be back on Monday recapping the action from over the weekend.  As always, feel free to ask any questions, leave any comments, or give any suggestions below.  Thanks for reading, take care!

No point contest for Saturday? Well Viz I’m taking your guy Aho vs Vancouver just for sh!t§ and giggles. 😂

Haha, I usually keep it to Tuesday and Thursday’s. Maybe I’ll change that in the future. Let’s see if Aho bounces back tomorrow!

could just do days that have a certain minimum amount of games (which are often tues/thur/sat). what about calling a shutout as a 2nd option possible. that sounds fun too. so like “matthews vs VAN for 3 pt, and shesterkin @ DET for shuout” (imaginary examples, these don’t play those today (probably)). wouldn’t be forced to pick both, but could be 2 separate contests.

Maybe I’ll change it up to where you can pick someone for three points or pick a shutout, up to each person.

that is interesting idea. now i’m wondering how often these occur (shutouts obviously easy to look up, i don’t know where to look up how many 3+ pt games are had year by year) relative to each other.

Trying out this fancy new image-adding thingamabob we have now!

For a guy I’d never heard of, this ain’t too shabby. 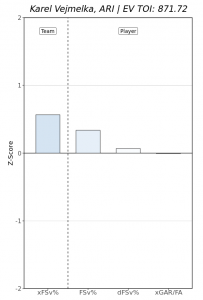 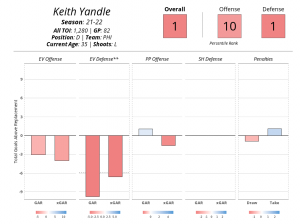 Holy smokes haha, that is something


The 2022 @Razzball / @steamerpro v1 projections + updated Player Raters are up. Expect a lot of little shifts and changes over the next month.