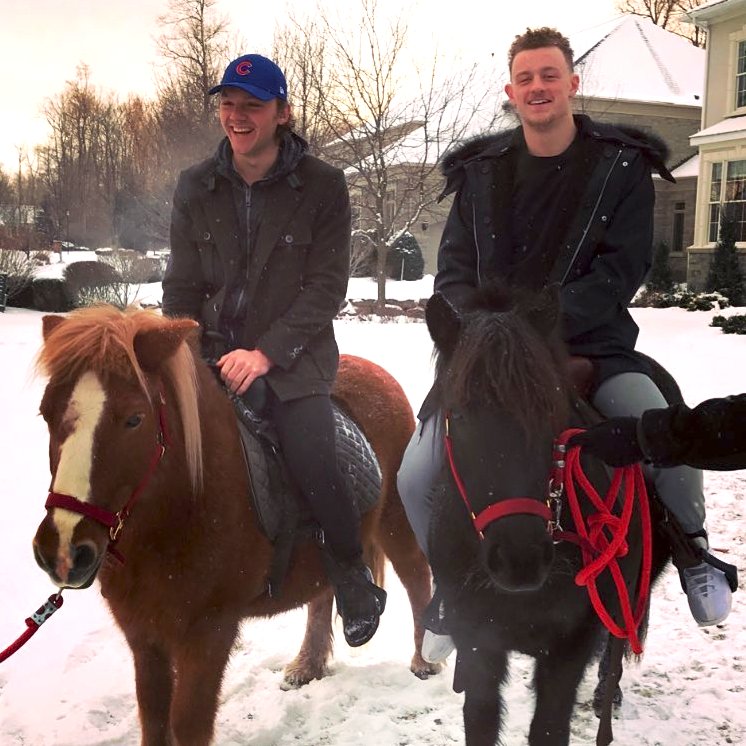 Apparently January 10th is Sam Reinhart day.  Last year, he scored his first career hat trick on January 10th and he followed it up with another three point night yesterday.  Reinhart scored a goal and two assists with four shots in the 4-1 win over the Flyers.  It almost feels a bit disappointing because he missed a wide open net that I’d expect a high school player to bury.  Regardless, that’s 12 points in the last 10 games for Reinhart.  I’ve been preaching for weeks that he’s a must own but he’s still available in over 2/3rds of leagues.  He’s not available in RCL’s (well done guys!) but for your other leagues, grab him if you’ve been hesitant.  How can you not like a Rein-o on a horse?  Jack looks like he’s having too much fun.  Anyways, let’s take a look at what else happened the last two nights around the league.

Roberto Luongo -28 save shutout in the 3-0 win over the Devils.  The wins are down but the rest of Luongo’s numbers are right there.  With the team more likely to be healthier in the second half than the first, there is some upside for a big second half here.

Jussi Jokinen – Goal and an assist with three shots.  A huge disappointment after a 60 point 2015-16, Jokinen also has potential for a big second half.  He’ll be in my streamer list for tonight (spoiler alert!).

Vincent Trocheck – Goal and an assist with three shots playing 25:48.  Good lord, that’s a ton of ice time.  Get Trocheck on your team everywhere you can.

Cory Schneider – 26 saves on 27 shots taking the loss.  We’re starting to see the Schneider we are accustomed to.

Braden Holtby – 22 saves on 23 shots in the 4-1 win over the Caps.  He’s the hottest goalie on the planet at the moment.

Nicklas Backstrom – Goal and an assist with two shots.  His numbers are exactly in line with last season’s but with extra shots.  Great first half for him.

Evgeny Kuznetsov – Goal and an assist with four shots and two PIM.  He’s backkkkkk.  Eight points in his last four games with the shots coming up and penalty minutes being chipped in at a higher rate.

Alex Ovechkin – Goal and two assists with five shots.  This Caps team is ready to roll in the second half.  It wouldn’t surprise me one bit if they still win the division.

Connor Hellebuyck – 28 save shutout in the 2-0 win over the Flames.  It’s up and down but at least the wins have been above average.

Dustin Byfuglien – Goal on four shots.  Top 5 D on the season now and by a fairly decent margin.

Blake Wheeler – Goal on three shots.  While he probably won’t reach last season’s level, Wheeler is still on pace for 65 points with 50 PIM and almost 3 shots per game.

Drew Doughty – Goal and an assist with two shots.  Doughty has been fine yet unspectacular.

Anze Kopitar – Goal and an assist.  Arguably the biggest disappointment now that Kuznetsov has turned it around, Kopitar has the talent to do so as well.  The key will be the Kings putting Tyler Toffoli on his wing when he returns.  There’s no guarantee that it happens though.

Anders Nilsson – 39 saves on 40 shots in the 4-1 win over the Flyers.  Nilsson has been a huge surprise for the Sabres this season.  I think he’s worth streaming every time out at the moment.

Evander Kane – Goal on six shots playing over 20 minutes.  He’s still available in over 60% of leagues.  What are you waiting for?

Ryan O’Reilly – Two assists with a shot.  Is having multiple points in every game since you return from injury a good thing?  Asking for a friend.

Brandon Saad – Goal on four shots.  Any time one of the Blue Jackets go in a mini-slump, they snap it preventing a serious downswing.  Saad’s season has been outstanding on all levels.

Victor Rask – Goal and two assists with three shots.  The top line had a big game that was long overdue.  Rask was dropped in a large chunk of leagues during his cold streak so be sure to pick him up if he’s available.

Derek Ryan – Goal and an assist with two shots.  He didn’t take every shift with the top line but he did enough to get two points with them.  Top end streamer while he’s getting regular shifts there.

Jeff Skinner – Goal and two assists with five shots and two penalty minutes.  That’s stuffing the stat sheet.  Skinner is currently a top 50 forward despite a poor plus-minus.  Nice to see him staying healthy for the third straight season.

Patrice Bergeron – Two assists with eight shots.  That’s five points in the last four games with a whopping 24 shots in that span.  Look for a big bounce back in the second half for Bergeron.

Torey Krug – Goal and an assist.  Finally some puck luck for Krug!

Brad Marchand – Two goals and an assist with five shots.  Back among the top ten forwards for the second straight season.  It’s remarkable that the Troll elevated his play to such an elite level.

David Pastrnak – Three assists with five shots.  He hasn’t scored in 11 straight games which sucks but at least the assists are coming in; Pastrnak has 5 in the last 4 games.

Frank Vatrano – Goal and an assist with three shots.  He’s an elite streamer while he remains in the top six.

Colton Parayko – Goal on three shots with two PIM. He finally scored! Krug and Parayko with a goal in the same game!  Finally they break the curse of high volume shooters who couldn’t freaking score.

Jake Allen – 8 saves on 11 shots in the first period before getting pulled in the 5-3 loss to the Bruins.  Woof.  Allen has been a huge disappointment but I don’t think there’s anything you can do besides roll him and hope for the best.

Sven Baertschi – Assist with two shots.  I’ve wrote a lot about Baertschi the last couple weeks so I won’t ramble but to reiterate, I’ll be all over Baertschi in drafts next season.

Pekka Rinne – 29 saves on 30 shots in the 2-1 OT win over the Canucks.  Frustrating because Rinne was less than a minute away from a shutout but a solid start nonetheless.  He’ll face a much stiffer test on Thursday against the Bruins.

Roman Josi – Two assists with a shot.  He’s quietly been a huge disappointment like the majority of his teammates.  There’s plenty there for them to turn it around though.

Andreas Athanasiou – Goal on two shots.  Athanasiou is finally getting a shot in the top six and he’s rolling at the moment with 3+3 in the last three games.  I’ll definitely be streaming him on Thursday against the Stars.

Ryan Hartman – Two assists with four shots with two PIM.  Everything has been great over the last week so stream Hartman while he’s rolling.

Duncan Keith – Goal and an assist with four shots.  All of these defensemen who can’t score found the back of the net last night!  Keith has been a solid #2 as expected.

Richard Panik – Goal and an assist with two shots.  He’s fallen off a cliff after a great start.  Panik is a bottom end streamer at this point.

Mikkel Boedker– Hat trick.  This doubles his goal total on the season after receiving a fairly big contract from the Sharks.  Could he turn it around in the second half?  Sure, he’s topped 50 points multiple times.  Do I expect it?  Not really.  You can stream him but I wouldn’t be running to grab him.

Marc-Edouard Vlasic – Two assists with two shots playing over 25 minutes in his return from injury.  He’s bottom end; if you want to hold him for penalty minutes and a decent plus-minus with assists, that’s fine.  I’m probably leaving him on the waiver wire for now.

Patrick Maroon – Six shots with two PIM.  In case you didn’t grab him yet, here’s a reminder to do so.

John Gibson – 34 save shutout in the 2-0 win over the Stars.  Five great starts in a row for Gibson who is setting himself up for a big second half.

Jakob Silfverberg – Goal and an assist with five shots.  He’s quietly had a breakout first half to the season as he’s on pace for 55 points after failing to top 40 in any other season of his career.  Clear hold right now.

Radek Faksa – Three assists with no shots over two games.  Faksa is a bottom end streamer who is starting to flash some upside.  I like his chances to make a real impact in dynasties.

Jiri Hudler – Goal and an assist.  There’s also plenty of upside here but until the minutes go up, I’m not buying in.

Tyler Seguin – Goal and an assist with twelve shots over two games.  His numbers are right in line with the past three outside of a drop in plus-minus.

Patrick Sharp – Goal and two assists with ten shots.  Pick him up immediately if he’s still available in your league

Devin Shore – Goal and an assist with two shots and two PIM.  Shore has emerged from off the radar due to injuries to have a solid season in the Stars’ bottom six.  The former second round pick has some decent long term upside so he’s not a bad flier to take in dynasties.

Wednesday Streamers – Standard four game slate limiting the options.  That said, there are a few that I really like so let’s get to them:

Jussi Jokinen (15.5%) – The minutes are through the roof right now for everyone in the Panthers top six.  While the Islanders are playing better with Greiss in net and Tavares destroyed them in the playoffs last season, Jokinen won’t match up with him.  Look for the second line in Florida to take advantage of the depth guys for N.Y.I.

Mathieu Perreault (1.9%) – The Jets have shuffled their power play units around and put Perreault on the point of the first unit.  Given that he’s in the top six already and the Canadiens are depleted, it’s a solid spot for Perreault to produce.

That’s all for now guys.  My next set of daily notes will be out on Friday recapping the action of the last two nights.  There’s a good chance that we’ll be able to stick to the regular schedule and have a podcast drop Thursday morning so be on the lookout for that.  As always, feel free to ask any questions or leave any comments below.  Thanks for reading, take care!