If you follow my writing at all, you know how much I love Brent Burns.  I mean, how can you not love this face? 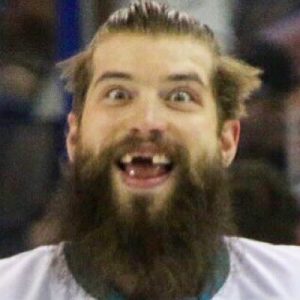 He’s been among the most disappointing players in fantasy hockey to this point, mostly because he’s found a way to have a horrible shooting percentage.  Well, since my last set of daily notes, Burns is finally back on track!  In his past three games, Burns has three goals and three assists with a whopping 22 shots on goal.   There’s still plenty of time for Burns to deliver an elite fantasy season with a monster second half.  I certainly won’t put it past the reigning Norris Trophy winner.  I’m going to change things up a bit with this post.  Since I’m a bit behind, mainly because of the site going down last Thursday night, I’m going to list every player, by NHL team, that I think is a hold or streamer in standard leagues, guys who become in play with hits, blocks and faceoffs added, and then add some information where necessary.  Streamers will be in the order I prefer to use them.  Let’s get to it!

Holds: Rakell, Getzlaf, Perry, Silfverberg, Henrique, Fowler, Montour, Gibson.  Ryan Getzlaf returned on Monday so get him activated immediately.  Adam Henrique remains a hold for now.  That could change when Ryan Kesler returns, which is soon.

Streamers: None really, outside of Miller when he starts.  This team is extremely top heavy.  I imagine Henrique eventually drops to this tier eventually.

Holds: OEL, Raanta.  I assume this is a bit controversial, but I can’t stomach the plus-minus from any of their forwards.  With Clayton Keller in the midst of a cold streak, I’m fine with holding him but you can also let him go in non-dynasty formats.

Holds: Bergeron, Marchand, Pastrnak, Krug, McAvoy, Rask.  The Bruins are extremely top heavy.  I’ve been very impressed with Charlie McAvoy lately.  McAvoy is one of my favorite long-term fantasy players.  Assuming the shot rate increases with experience, he has a great chance of developing into a #1 fantasy defenseman.

Streams: Krejci, Bjork, DeBrusk, Backes, Chara.  David Krejci would be a hold if he can get his shot rate up back towards two per game.  David Backes and Zdeno Chara become holds if you add the extra categories.

Holds: Eichel, Kane, Ristolainen, Lehner.  Rasmus Ristolainen‘s minutes are through the roof right now and with that has come an excellent shot rate.  I think it’s going to get good sooner than later.

Streams: RoR, Reinhart, Pominville, Rodrigues.  Evan Rodrigues is a guy that should be available in leagues that are 16 or deeper that I would grab.  He’s looked great since his return with his speed being a major factor.  It wouldn’t surprise me at all to see him move up the lineup soon.

Streams: Lindholm, Staal, Williams, Rask, Ryan, Faulk.  It pains me to put Justin Faulk here but it’s hard to hold a guy with only 1+6 in 28 games, no matter how good the PIM and SOG are.  It should turn around eventually but I’m out of patience.

Holds: Toews, Kane, Saad, DeBrincat, Anisimov, Keith, Crawford.  Didn’t think it would come this year but Alex DeBrincat has certainly played his way into hold status.  He’s on a 30+25 pace.

Streams: Kerfoot, Compher, Jost, Andrighetto, Varlamov.  I’m very encouraged about Alex Kerfoot‘s future.  The shot rate is the only thing keeping him from being a hold right now.  My guy Sven Andrighetto is temporarily down on the fourth line which is why he’s at the bottom of this list.

Holds: Panarin, Anderson, Wennberg, Werenski, Jones, Bobrovsky.  Yes, the time is here, Josh Anderson is a no-brainer hold.  Well over 3 shots per game, 30 goal pace will do that.

Streams: Atkinson, Foligno, Dubois, Bjorkstrand, Jenner, Milano.  Move Foligno to a hold with hits included while Jenner gets close.  I’ve run out of patience with Cam Atkinson.  The minutes are consistently going downward at the moment making it increasingly unlikely he breaks out of his cold streak.

Streams: Zetterberg, Nyquist, Tatar, Athanasiou.  Henrik Zetterberg isn’t doing enough at the moment to hold him.  Same goes with the next two guys while Athanasiou has always been a a streamer.  You can add Jimmy Howard here as well but it’s hard to pick any matchups that he’s worth using in.

Streams: Puljujarvi, Cammalleri, Klefbom.  Like Faulk, I’ve run out of patience with Oscar Klefbom.  I’ve been extremely impressed with Jesse Puljujarvi lately.  If your league includes the extra categories, Kris Russell is must own.

Holds: Huberdeau, Barkov, Trocheck, Yandle, Ekblad, Reimer.  It’s desperate for starts but I think you have to hold James Reimer while Roberto Luongo is out.  Otherwise, the five guys aren’t debatable and none of the streams are close to holds.

Streams: Bjugstad, Vrbata.  While I wouldn’t use him in a 12’er yet, I’ve been very encouraged by Jared McCann.  I think there’s a fair chunk of dynasty value here for the former first round pick.

Holds: Staal, Granlund, Niederreiter, Zucker, Suter, Dumba, Dubnyk.  I don’t know if it lasts past Jared Spurgeon returning but Mathew Dumba should be owned everywhere at the moment.  I still have faith in Nino Niederreiter getting it going, but regardless, the goals and PIM are enough to hold.

Streams: Coyle.  Charlie Coyle is the only one, and I’ve talked about recently in notes and the podcast, I think he becomes a hold sooner than later.

Holds: Patches, Drouin, Gallagher, Weber, Price.  I’m thrilled that Brendan Gallagher is back on track after last year being wasted by struggles and injuries.

Streams: Galchenyuk, Shaw, Danault.  The Canadiens getting healthier actually pushes Andrew Shaw down the streamer list quite a bit.  Obviously he still has value if you need PIM.

Holds: Forsberg, Arvidsson, Johansen, Turris, Smith, Fiala, Josi, Subban, Ekholm, Rinne.  The two guys up for debate are Kevin Fiala and Craig Smith.  At the least, they’re among the best streamers in the league, but I’d hold them while they are on fire.

Holds: Hall, Hischier, Vatanen, Butcher, Schneider.  I’m assuming that Sami Vatanen gets going in New Jersey so I would grab him now.

Streams: Bratt, Johansson, Zacha, Zajac, Gibbons, Wood.  Travis Zajac is back which could help the third line getting going but he’s quite yawnstipating himself.

Streams: Ho-Sang, Ladd, Nelson, Beauvillier.  I really wish Josh Ho-Sang would just shoot the puck more.  That’s all it will take for him to become an elite streamer or better.

Holds: Kreider, Buchnevich, Zibanejad, Zuccarello, Shattenkirk, McDonagh, Lundqvist.  Ryan McDonagh is up for debate but the assists and plus-minus are enough for me to still hold.

Streams: Nash, Hayes, Miller, Grabner, Desharnais, Skjei.  I strongly debated putting Rick Nash as a hold because of the shots but ultimately decided there wasn’t quite enough.

Holds: Hoffman, Stone, Brassard, Karlsson.  Nobody else is even close at the moment.

Streams: Duchene, Smith, Ryan, Pageau, Chabot, Phaneuf, Anderson.  I don’t even want to own Craig Anderson right now, that’s how bad it is in Ottawa.  Obviously Matt Duchene can break out at any time but he’s a mess at the moment.

Holds: Giroux, Voracek, Couturier, Simmonds, Gostisbehere, Provorov, Elliott.  He hasn’t been great this year but Brian Elliott is playing well enough right now to be owned everywhere.  Wayne Simmonds is up on the first line so look for him to get going in the short term.

Streams: None?  I mean, Konecny, Filppula, Patrick are bottom end at best.

Holds: Crosby, Malkin, Kessel, Hornqvist, Guentzel, Letang, Maataa, Murray, Jarry (for now).  The forwards are crystal clear with only one guy on the fringe (more on him later).  I think there is barely enough here for Olli Maataa to be a hold while Schultz is out although I wouldn’t argue with anyone who thinks he’s not quite good enough.

Streams: Sheary, Rust.  Conor Sheary is close to a hold while he’s on the top line but he simply hasn’t been good enough recently.

Holds: Couture, Pavelski, Burns, Jones.  I can super close to saying you could cut Joe Pavelski but despite his diappointment, it’s not to that level.

Holds: Schenn, Tarasenko, Stastny, Steen, Pietrangelo, Parayko, Allen.  The injury to Jaden Schwartz does hurt a fair amount but I’m still on Paul Stastny with Tarasenko and Alex Steen with Schenn.  Seems like almost every forward on the Blues has a last name beginning with S!

Streams: Sobotka, Berglund, Edmundson.  Joel Edmundson is a guy I’ve like but doesn’t have opportunity.  He’s an okay option, especially for cheap in DFS, if Pietrangelo misses any more time.  Same goes with Vince Dunn but t a lesser extent.

Streams: Johnson, Palat, Killorn, Gourde.  Tyler Johnson is very close to a hold right now.  He’s hotter than a pistol with 7 points in the past 4 games.

Streams: Marleau, Hyman, Brown, Bozak, Komarov, Zaitsev, Gardiner.  None of these guys are even close to being a hold.

Streams: Sedins, Eriksson, Vanek, Virtanen, Gagner, Edler, Del Zotto, Nilsson.  There are tons of options here but none of them are truly elite streamers.

Holds: Marchessault, Karlsson, Smith, Neal, Perron, Haula, Fleury.  It sounds like Marc-Andre Fleury could return tonight so make sure he’s owned everywhere.  David Perron and Erik Haula may come as surprises but Perron has 22 points in 23 games while Haula has 11+8 in 25 games, including 4 goals in the past 5 games.

Streams: Tuch, Miller, Schmidt, Theodore.  I don’t think any of the Vegas D are good enough to hold but these three all have a decent amount of value.

Streams: Wilson, Vrana, Burakovsky, Niskanen, Orlov.  I’m close to saying Matt Niskanen is a hold.  He clearly is a hold in hits and blocks leagues.  The minutes and shots are up along with 3 points in the last 4 games.

Holds: Scheifele, Wheeler, Connor, Ehlers, Laine, Trouba, Hellebuyck.  Dustin Byfuglien would be here but he’s now out week to week.  This elevates Trouba to a hold.

Streams: Little, Perreault, Armia, Myers, Morrissey.  In a deeper league that includes the extra categories, I really like Josh Morrissey while Big Buff is out.

That’s all for now guys.  I’ll be back on Wednesday with my normal set of daily notes recapping Tuesday’s games.  For those who need streaming help, be sure to check out Lackeydrinksonme’s post here.  As always, feel free to ask any questions or leave any comments below, even if you disagree with some of my choices!  Thanks for reading, take care!