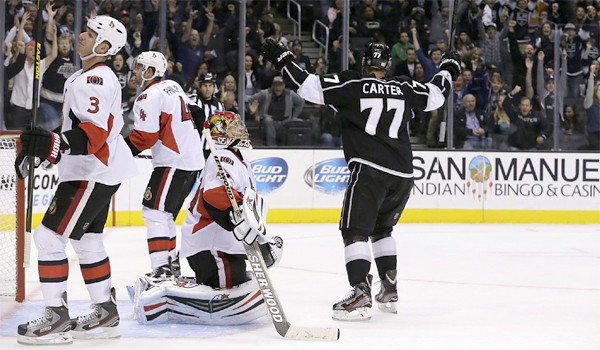 Jeff Carter and Dustin Brown each scored twice as the Los Angeles Kings needed overtime to knock off the Ottawa Senators 4-3 last night. Brown scored twice in the first period while Carter was the overtime hero. Each player scored a power play goal in the first period.  Anze Kopitar and Mike Richards each added a pair of helpers in the winning effort.

Ottawa was down 3-0 after a period but goals by Jean-Gabriel Pageau, Milan Michalek and a power-play goal from Bobby Ryan tied the game up and forced overtime. Joe Corvo picked up a pair of assists in the loss.

These west coast games lately have had a bunch of points in them especially on the power play. I can’t explain why that is, but it’s the trend for now and keep it in mind as you set lineups.

St. Louis got a last-minute goal from Alexander Steen to knock off Chicago 3-2. The goal came with 21.1 seconds left and kept St. Louis perfect at 3-0-0 this season. The Blues weathered a Chicago power play that saw the line of Patrick Kane, Johnathan Toews and Patrick Sharp account for all six points on the night. Kane and Toews had the goals; Sharp had the helpers.

Vladimir Tarasenko and David Backes had the other St. Louis goals. Jarsolav Halak stopped 26-of-28 shots for the win while Corey Crawford (31-34) took a tough loss.

This game goes to show that there’s more than Chicago in this division. Right now, St. Louis and Colorado are tied for first in the Central Division at 3-0-0. It’s certainly not time to panic but don’t expect the rest of the Central to lie down and let the defending champs run amok.

I will now channel my inner Brick Tamland for the final game of the night.

Lars lit little lamp last night in the Canadiens’ 3-2 loss to the Flames. Why would they let a team made of fire play ice hockey? Wouldn’t that melt the rink?

Lars Eller’s fourth goal of the year came in the middle of the third period but the Canadiens couldn’t complete a rally from being down 3-0. PK Subban had a power play goal in the loss and a helper on Eller’s tally. Carey Price (22-25) is off to a slow start with a 1-2 record and 2.77 GAA for the Canadiens. He doesn’t resemble the goaltender who started out great last season but is looking a little more like the guy who crashed and burned down the stretch.

Calgary got goals from Sean Monahan, Sven Bartschi and a power-play tally from Curtis Glencross to build a 3-0 Flames’ lead. Joey MacDonald was the beneficiary as he picked up the win stopping 33-of -35 shots. MacDonald seems to have taken the lead in the battle between the pipes in Calgary and is 2-0-1 so far this season. He could be good for a spot start if you need one. Also beware that Calgary rode goaltenders until they broke last season and they were never heard from again. Risk-reward be thy name.

NY Rangers at Anaheim 1030pm  Check the goaltending matchup to see if Martin Biron might get the start.