Hey guys! Sven here and instead of a 31 in 31 today, I figured I’d try something new. I recently did a draft for a 10-team season total league, and thought you guys would like to have a look as a frame of reference for your drafts!

This draft required: 8F, 5D, 2G, four bench and one rookie included in the 19 picks.

2) (14) Steven Stamkos – With an early pick in the second round, I narrowed it down between Stammer and Seguin. Team Pino’s was very happy to get Seguin later in the second, but I am not a believer in the injury downside with Stamkos and I think he will have another electrifying year.

3) (27) Anze Kopitar – Kaptain Kope was one of my steals last year in the ninth round. With Eichel off the board, I went with a guy that will continue to single-handedly produce offence at times for the Kings. With a new veteran line mate in Kovalchuk, I think it will be another big year for Kaptain Kope.

4)(34) P.K. Subban – My strategy going into this draft, as previously stated in Viz’s D rankings, was to take three higher-tier guys to avoid the drop off as much as possible. In rounds 4-9 my plan was to take two F/D/G, so why not start with the President’s Trophy winning PP QB?

5) (47) Vincent Trocheck – I was barely able to hold in my excitement seeing Trocheck fall from 27 to 47. With Florida’s top-six receiving a great upgrade this offseason and a great potential to rack up PPP, Trocheck was a no-brainer for me at this point in the draft.

6) (54) Martin Jones – Six rounds in, I figured it was now or never to scoop up a good goalie on a great team. With the Pacific Division wide-open in my eyes this season, I went with Jones whose team in front of him looks the safest this season. He doesn’t do anything out of the ordinary, but I see this San Jose team winning a lot of games this season.

7) (67) Matt Dumba – One of my happy surprises in fantasy last year, I gambled on Dumba based on the notion that he would earn top-two minutes over Spurgeon. He went on to establish a new career-high, and looks primed to only improve on that this year.

8) (74) Ben Bishop – Wanting to get my goalie picks out of the way, I went with Bishop as my #2 for a second straight season. I think Dallas will be a lot better this season, and Bishop’s play will be a major part of that. He now has a year in the deadly Central Division under his belt and will hopefully be more comfortable this year.

9) (97) Dylan Larkin – If you have read anything myself or Viz have put out, we are both very high on Larkin this year. He actually put out an article on Larkin’s value as a sleeper and I was very happy to get him in the ninth round. Check out that article, or my Detroit team preview to read more about this guy!

10) (104) Dougie Hamilton – I couldn’t believe Hamilton was still available at this point. I was hoping to take three D early, and I went with the more-proven Hamilton over high-risk high-reward guys like Provorov and Sergachev (I didn’t think Serg would go that high!) With a new scenery (yet again) and likely the opportunity to carry the load offensively within Carolina’s D corps, Hamilton seemed like a no-brainer here.

11) (117) Evgenii Dadonov – One of my mid-season pickups I was most proud of last season, Dadonov slipped into the teen rounds for me to grab. I’m hoping he stays #1RW on the scary Panthers offence!

12) (124) Brandon Montour – Another D I was surprised was still on the board, as Montour had a solid first full season in the Show. Though there is always risk with young defencemen, Montour has arguably the most offensive upside among the Ducks’ top-four. With some PP#2 time, I figured it was a gamble worth taking.

13) (137) Jason Zucker – I streamed Zucker last season and sold off on him a few games prior to his great second-half. Another player to fall in this draft, I figured he was less risky of a pick given his first-line minutes and (hopefully) more PP time this season. I’m usually hesitant on guys that are coming off a breakout year, but I think Minnesota will still be a great team this year.

14) (144) Pierre-Luc Dubois – At this point in the draft, I was just looking for some top-line guys to pad my forward corps. Dubois will be given a ton of opportunity at #1C and if Panarin sticks around he will benefit tremendously from having that type of talent on his line.

15) (157) Shea Theodore – Ranked astronomically low by ESPN, I figured I’d take a chance on the guy that scored the Golden Knights’ first ever playoff goal (for all you sports bar trivia guys out there). Theodore will receive a good ice-time boost with Schmidt out of the lineup for the first quarter of the season, so why not round out my D corps with him?

16) (164) Cam Atkinson – Atkinson got off to an uncharacteristically slow start last season, and I was able to buy him low off FA and ride his strong second-half. This fluke first-half hopefully won’t repeat itself, but a gamble on a #1RW at this point in my draft was totally okay with me.

17) (177) Mark Stone – If you’ve read my Sens article, you’d know that things aren’t going to be ENTIRELY bad this season. Stone and Duchene will have every opportunity to fly under the radar and put together decent seasons, so I figured he’d be a safe gamble despite all of the negativity surrounding the Sens right now.

18) (184) Valentin Zykov – Up until this point, you were probably thinking “he has to take a rookie, doesn’t he? Isn’t that what he said? Why didn’t he take Mittelstadt?” Though I was high on Mittelstadt, I couldn’t see myself taking a gamble on a small sample-size guy that early in my draft. Though Svechnikov will likely get the #1W opportunities out of the gate, Zykov showed a lot of promise in his stint with the team last season. Top-six minutes out of my rookie is more than enough for me (especially this late in the draft) and I have no idea which direction this Canes team is going to go this season, but I’m along for the ride with him and Hamilton!

19) (197) Samuel Girard – I figured with my last pick I should take a bench D. Girard has been on my radar for some time now, and with top-four minutes looming and the odd PP opportunity playing behind Barrie should bode well for a respectable sophomore season. I’m not expecting too much from him just yet, however I expect him to be a force offensively down the road.

That’s all I have for now guys! If you like this type of material, I still have a 12-team keeper roto draft to do and would be happy to evaluate that as well. Happy drafting! 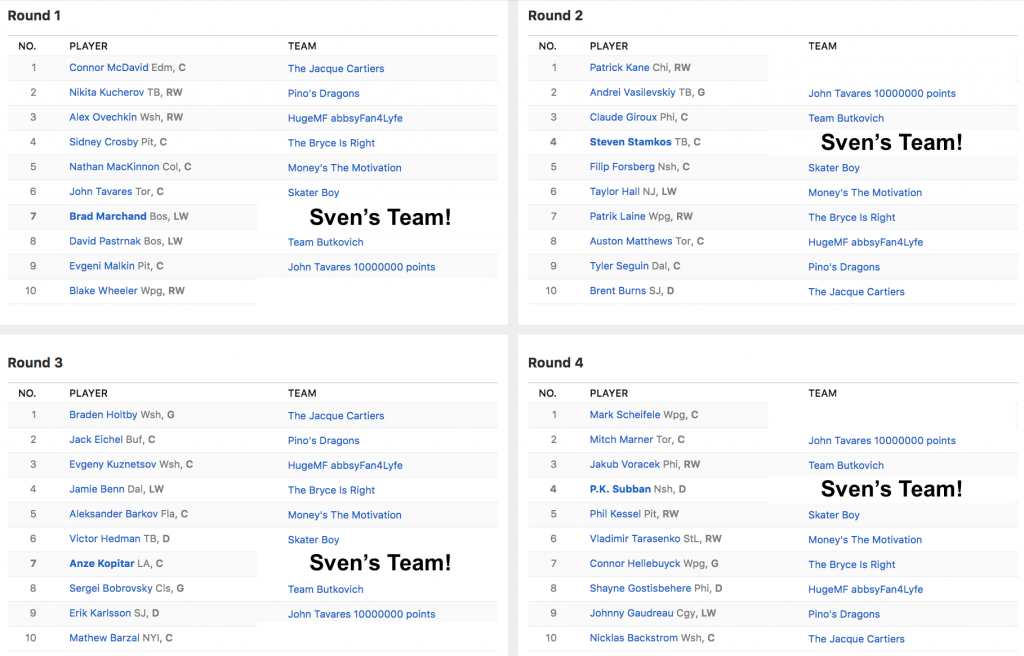 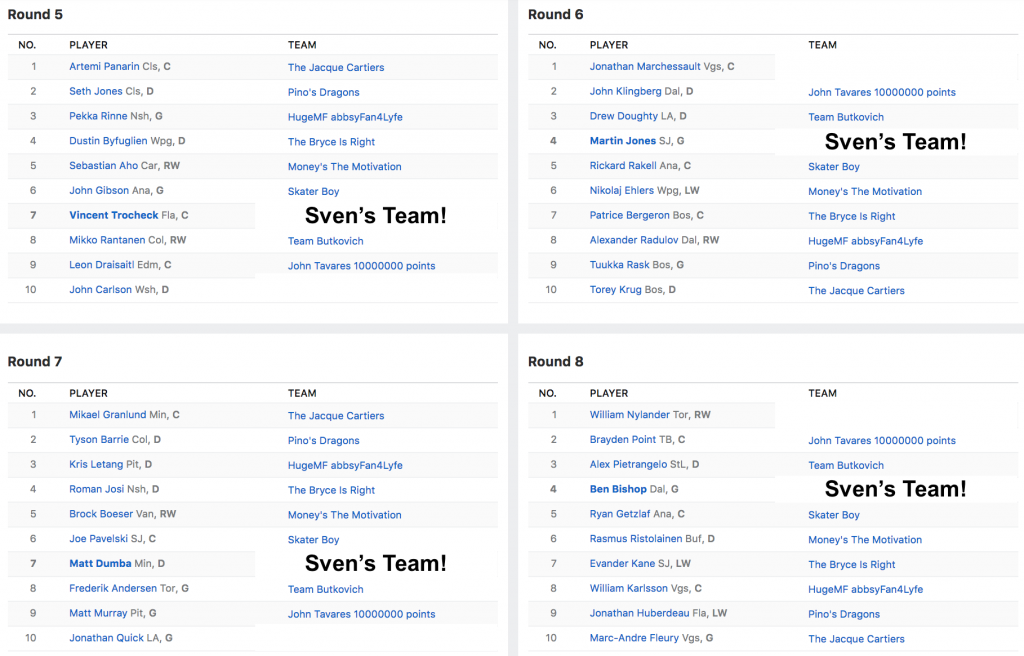 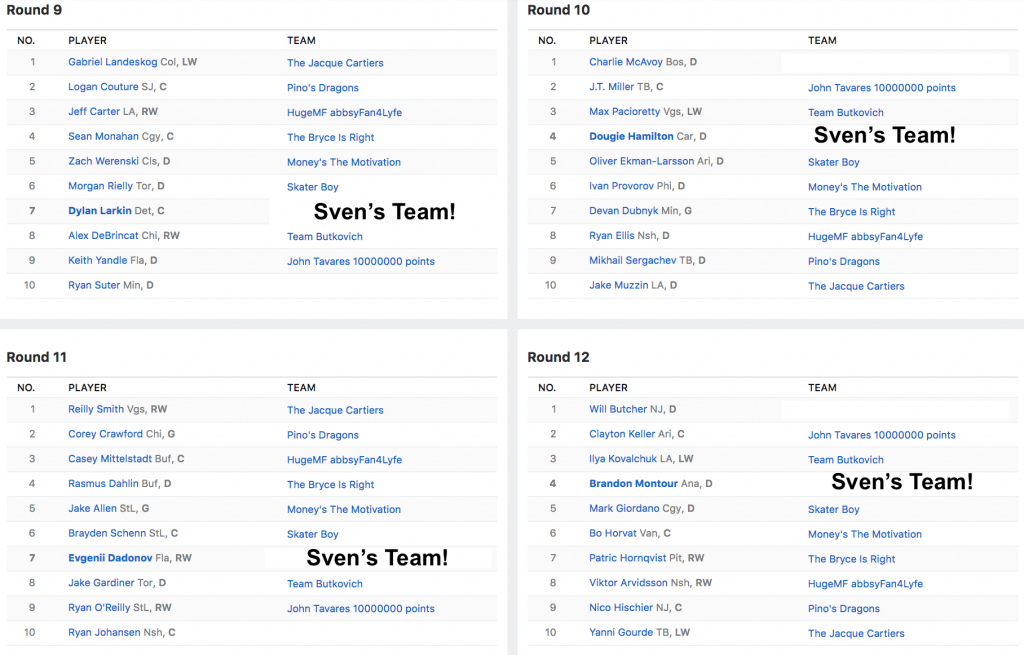 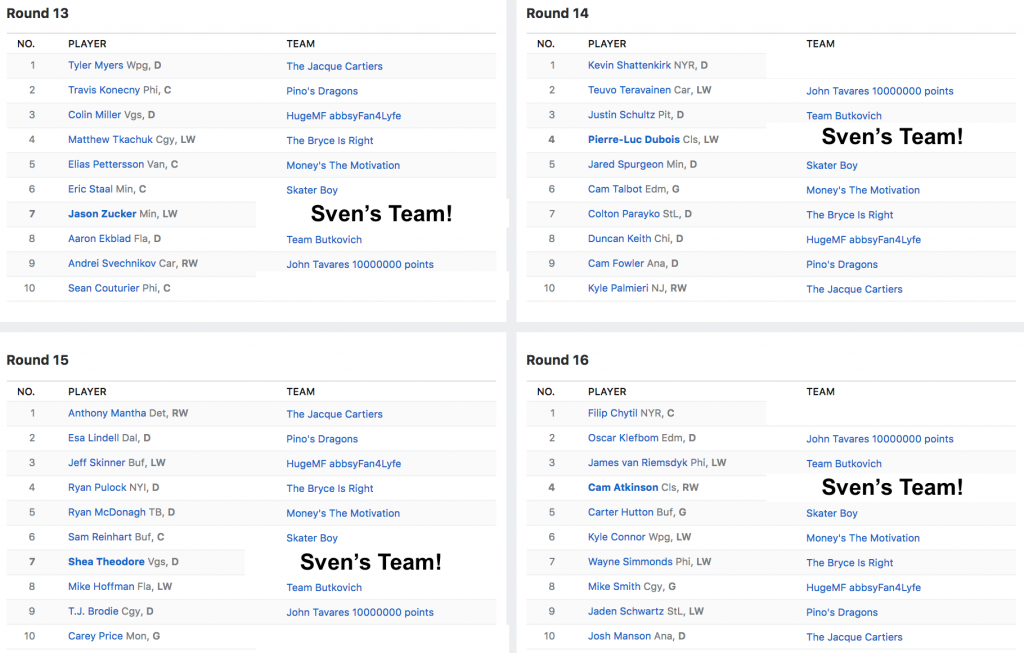 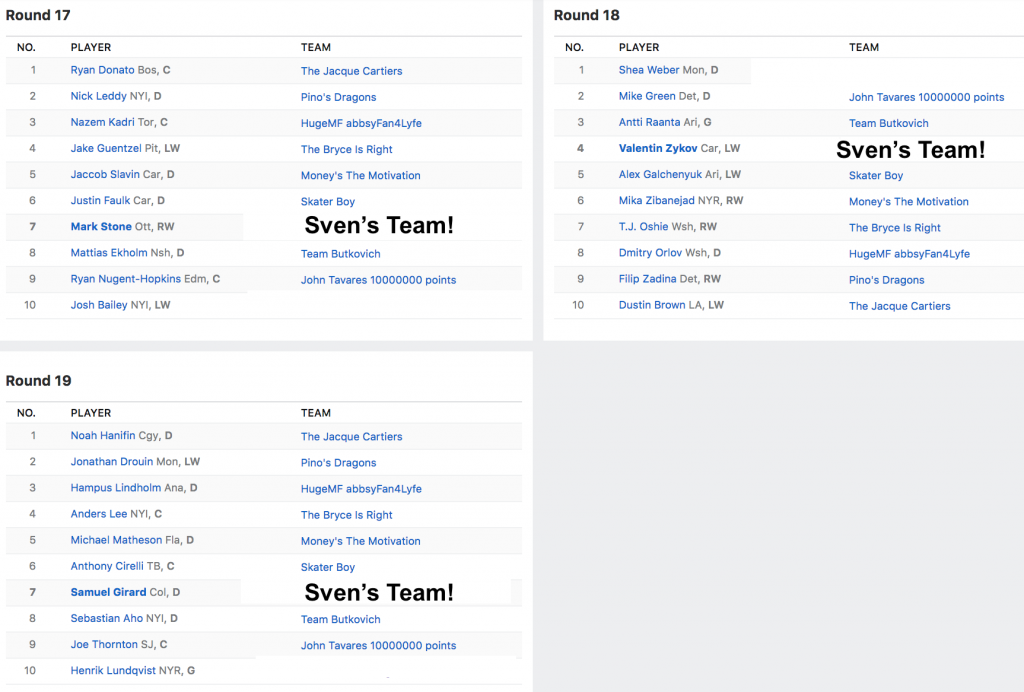