When I started looking for specific players to write about for the offseason, I wasn’t thinking about anyone on the Anaheim Ducks.  The Ducks were bad last season and they’re almost certainly going to be bad again.  That said, we saw last year that players on bad teams can still do well in fantasy, notably Stone before Ottawa traded him.  Well, when I did some digging, I found that a Razzball favorite i.e. one of my personal favorites was performing at a level that even I didn’t realize.  So what makes Ondrej Kase a sleeper for the upcoming season?

For starters, since the Ducks are bad, Kase should get the opportunity to play on the first line with Getzlaf and Rakell.  Sure, Getzlaf isn’t what he used to be, but he’s still a good playmaker.  Second, and most importantly, Kase generated the second most shots at even strength per 60 minutes in the league last season (behind another Razzball favorite, Brendan Gallagher).  Sure, Kase only played 30 games, but he registered a terrific 94 SOG in those games playing 15:39 a night.  Kase played to a 30 goal pace last season as well which will go unnoticed because of his injuries.  He’s also 23 years old meaning natural development should occur to boost his numbers.  To show that last year wasn’t an aberration, look at his numbers besides the guy who he is replacing, Corey Perry: 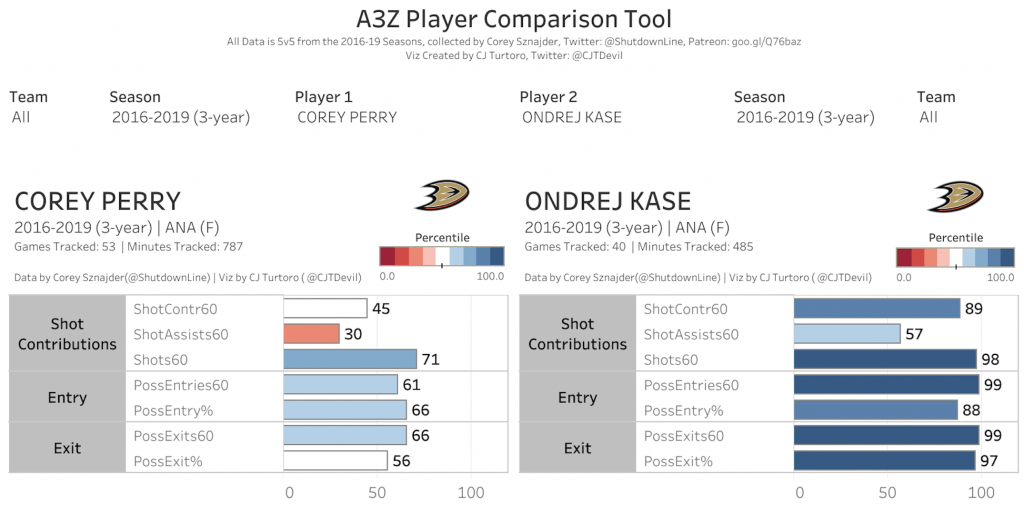 Over the last three seasons, Kase is among the best in the league at entering the opponent’s zone with possession while also being among the best in the league at exiting his own zone with possession.  This is why he’s become an elite possession player while nobody has really noticed.  It’s why I’m not worried about Getzlaf hurting the line in terms of transitioning because Kase can do the heavy lifting.  Stone also showed last year that even if your team is bad, you can have a quality plus-minus if you dominate the puck.  That’s what Kase should do.

There’s also more upside if he gets power play time.  Kase had 4 PPP last season in his 30 games last season with only one goal.  Besides Rakell, Getzlaf, and Fowler, it’s hard to say who will get the other spots on the first power play unit in Anaheim.  Could it be Kase?  I don’t see why not, but at the least, he should be on PP2, an upgrade from last season.

To summarize, we have a player who is 23, played at a 30 goal pace last season with over 3 shots per game, and will get a bigger role this season.  NHL dot com’s early rankings have Kase at 204th overall, while ESPN’s has him outside of the top 250.  This doesn’t make any sense to me, but I would love for Kase to stay under-ranked.  There’s a real chance here for 30+ goals and pushing 300 SOG from a player you can get very late in drafts.  The only downside for Kase is the lack of PIM (and hits if you’re in a league that includes them).  Regardless, I expect Kase to set career highs across the board with ease making him one of my favorite sleepers, possibly my favorite considering how late you can draft him.  My guess is he’s going to come in right around 100th overall in my rankings and he’ll be a player I target in all leagues this coming season.

If you have any thoughts, comments, or questions, be sure to post them below.  Sven will have his next team preview out this afternoon as well.  His previews will be coming every day this week, while I will have more posts coming as well, probably on Wednesday and Friday.  Thanks for reading, take care!