We’ve reached the home stretch with three weeks left in the season.  Today, I’m going to hit on some notable things that’ll help you for your fantasy playoffs and other things just to watch for future gain.  Let’s get to it!

Owen Power signed with the Sabres and should make his NHL debut on Tuesday against the Maple Leafs.  It’s not the best matchup obviously, but if you need defensemen help, I’m good with adding him.  The Sabres finish the week with a back-to-back against the Flyers which is pretty advantageous.

Matty Beniers and Kent Johnson have also left Michigan to sign with Seattle and Columbus respectively.  The plan is for Johnson to play Wednesday against Montreal (assuming his visa is taken care of) and there’s no plan yet with Beniers, although I’d suspect some point this week.  Beniers is more appealing to me because the Kraken have an outstanding streaming schedule next week as they play on three light days, as noted in my Playoff Manifesto.  Welcome to the Razzball Database!

The second line for the Blues went off this weekend, with Robert Thomas leading the way, scoring two goals and adding three assists.  First off, he’s still available in almost two-thirds of leagues which makes no sense.  He’s over a point per game on the season.  Thomas actually has nine shots in his last four games, and 14 in the past 7.  I have no idea where to rank him next season.  On one hand, he’s clearly one of the best playmakers in the league as he’s in the top five for primary assists.  On the other, if he’s shooting it 1.5 times per game or less, that’s a major problem.  If Thomas ever got to two shots per game, he’d be a top 75 guy, at least.  It’s going to be difficult to project.

Jack Roslovic scored a hat trick and added an assist against Detroit on Saturday.  Alliteration aside, it’s been more down than up for Roslovic this season, which is a big disappointment given how he finished in Columbus last year.  Is he going to get moved again?  Could they try him on the wing? With Johnson in the fold now, it’s going to be hard to envision Roslovic at center since the Blue Jackets already had Jenner and Sillinger.  Roslovic is a solid streaming option for Wednesday.

Even though he didn’t play the whole game with Crosby, Rickard Rakell assisted on both of Crosby’s goals on Sunday, totaling three in the 3-2 win.  That gives Rakell eight points in eleven games with Pittsburgh, but they all came in three games.  The Pittsburgh schedule is bad for streaming this week, but they have a three games in four days stretch next week where Rakell should be a top option.

Jordan Staal had a hat trick on Sunday.  It was his first since he was a Penguin and he’s been in Carolina for a decade.  I still have little to no interest in streaming him, but if you want to use a hot schmotato, Staal is an option.

If you need help on the blue line, Gustav Forsling is a very good option right now.  Since moving onto the first pair with Weegar, the shot rate is through the roof.  He has seven points in the last six games and is still available in 90% of leagues.  Not that Florida is matchup dependent by any means, but they have good matchups for the next ten days as well.

He’s been overshadowed by the first line and even his defensive partner, but Noah Hanifin has taken a big step forward for the Flames this season.  Hanifin had his best offensive game on Saturday, dishing four assists against the Kraken.  It’s not the most exciting stat line, but Hanifin has solidified himself as a bottom end hold.

Very strong end to the season for Trevor Zegras, even with the Ducks falling apart down the stretch.  I’m interested to see what Verbeek does this offseason.  Regardless, I’d like to see Terry stay on Zegras’ wing.

After a rough start, Darcy Kuemper has been incredible.  He stopped 49 of 50 shots he faced against the Oilers before stopping all three of their shootout attempts in the 2-1 Colorado win.  Kuemper now has 34 wins in 50 starts with a 2.37/.926.  If he plays this well in the playoffs, I don’t see how Colorado loses, assuming Landeskog and Kadri return as expected.

I questioned Boudreau’s motives with Alex Chiasson last week, but the motive doesn’t matter for fantasy.  Chiasson is playing with Horvat right now and getting power play one time right now.  He had a goal and an assist with seven shots against the Sharks on Saturday.  You can bet that Vancouver is going to roll their top six for huge minutes on Tuesday in what effectively is a must win game against Vegas.  After that, they have Arizona on the schedule.  It’s a decent spot to use Chiasson, especially in deeper leagues.

I really hope that Alex Ovechkin gets to 50 goals this season at 36 years old.  He only needs five more goals to get there.  What a legend.

This is a reminder that Winnipeg and Montreal have incredible streaming schedules this week.  They play the only game in the league tonight and then both play on a four game Wednesday slate.  It gets better!  They both play Friday as well which is a two game slate.  Cole Caufield is still available in almost 50% of leagues and they have plenty of other decent options, while Paul Stastny is definitely the best Jet to stream.  If your league has a small limit on the amount of moves you can make in a week, I strongly suggest streaming from these two teams as you should have close to a full lineup on Tuesday, Thursday, and Saturday anyways.

That’s all for now guys.  I’ll be back on Wednesday recapping the action of the next two nights.  As always, feel free to ask any questions, leave any comments, or give any suggestions below.  Thanks for reading, take care!

Need to set my lineup for the semi finals. I uploaded my lineup to this point and the options I have so let me know if you can’t see it and I’ll post the actually matchups for everyone.

There is quite a bit of overlap because of multiple position eligibility so wanted your thoughts on the best 2 Centres and 1 RW.

Finally just to confirm you would roll Dahlin for 4 games over Trouba for 3 games? 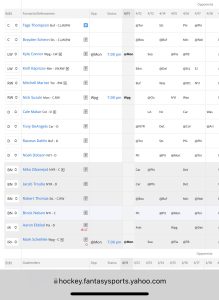 I would go Dahlin for sure, yes. This is so tough. I think starting Tage is a must given how well he’s been playing and the matchups are pretty good, it’s not like Toronto and St. Louis are stout defensively and the Flyers are terrible. I probably throw out Nelson because the addition of points hurt him. I’m playing Thomas with the addition of points with how he’s playing.

That leaves me down to Schenn, Suzuki, and Zibanejad for the last spot. I really don’t have a strong opinion here, so if you do, I say go with it. Gun to head, I guess I lean Schenn because he’s playing well and the hits are great?

Sounds good, best of luck LG! Hope it works out.

Hey Viz, would you drop Kallgren to stream either Comrie or Mont tonight? 16 teamer with only 3 adds for the week and I already used one on Dvorak. My other goalies (we start 2) : Lehner, Husso, Kallgren, Ullmark. Fishing for wins

Hmm, this is tough because it’s hard to say who wins this game tonight, it’s close to a coin flip in the betting market. If you grab Comrie, he probably plays again at the end of the week, but do you even want to start him against Florida or Tampa? If I had to pick one, I guess I’d go Montembault and hope for the best.

whats going on bud! I think this week has the most annoying start sit decisions of the season for me! Damn these weeks with so many games on 2 nights. I dropped fiala and Scheifele after he got hurt for Stasny and Gallagher as cole is taken in my league.I also picked up Dvorak using my moves from the quarter finals for the FW.

Anyway Tuesday Thursday I need to choose between perron Buch or drop someone to activate Batherson (hoping to save him on IR for when i drop these canadiens). My other wingers are Both Tkathuk, Kane and Pacioretty so they are all autostarts I think (nervous about Pacioretty tho.

P.S I remember going to Quebec to snowboard awhile ago and stopping at a mcdonalds and they had some special Gallagher burger at the time. A Gallagher although sounds more like something that happens after you eat Mcdonalds… so in the event of a Mcshiz I usually think Im havin a Gallagher. Sorry for TMI

Good move using last week’s moves for this week. I think on Tuesday, I would sit one of the Blues, I guess Perron with how the second line is rolling? That’s close though. I think on Thursday, I might lean towards sitting Patches going against Calgary when the Blues play the Sabres. I’d wait to decide to see if Stone gets back in the lineup or not.

Also have Malkin he’s gone for 4 games. I’m thinking about dropping him and streaming players the rest of the semifinal week. Not too concerned because there us no limit on moves. What do you think? Thanks Viz

Yeah, it’s nice to have a reason to be excited about games at the end of the season when your team is in playoff contention instead of playing out the string. It’s hard because I don’t see him getting the PP1 time to match Seider, but I do think his overall upside is that high, yes.

I would drop him, Malkin isn’t at that crazy level anymore when you can’t risk losing him, if somebody else grabs him, it’s not the end of the world. Need to get that volume.

brink out there. 14 team dynasty with hits/blocks/PIMs/shots/PPP/SHP added. currently with:

C (2): ROR, horvat, oshie (RW), zibanejad, verhaeghe (LW)
LW (2): skinner, j.robertson, m.boldy (RW), t.thompson (all F)
RW (2): tarasenko, marner, fiala (LW), zucker (LW), arvidsson (LW)
W (2)
F (1)
D (5): pulock, petry, chariot, karlsson, durzi, gudas, borowecki
util (1):
G (2): lehner, kallgren, c.petersen, l.thompson (had been desmith here, optimally i only want 3 goalies (3 min appearances per matchup, even if that’s longer than 7 days) but this league is crazy goalie hoarding spot, and thompson did very well when lehner was hurt (and he’s always hurt). kallgren i also added right when he went nuts for those first 2 games, still gets starts too. also we have a max 10 off roster prospects list (but guys can only be sent down if down in real life during season, also could in preseason)
IR/IR+ (10 each): risto, kadri, hague, sandin, ellis (good lord this guy is missing a bunch, almost entire year)

if i wasn’t in the semi finals right now i’d assume drop zucker for brink here (brink already on good line and minutes fine), might be anyway.


With the New Year, we have all new #FantasyBaseball projections for every hitter and pitcher courtesy of @rudygamble and @steamerpro https://t.co/J5nT6aQkSA