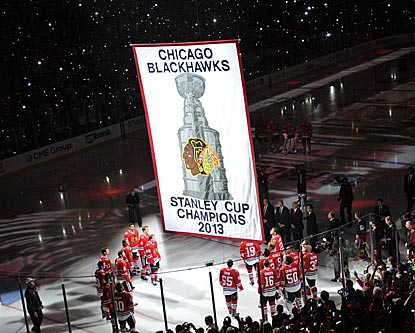 The Hawks raise their banner before taking on the Capitals on opening night.

The Chicago Blackhawks raised their Stanley Cup banner to the rafters last night. They went out and downed the Washington Capitals 6-4 to open their title defense and make Mikhail Grabovski‘s hat trick go for naught in the losing effort.

Analysis: Washington scored three times on the power play with Ovechkin tallying once and Grabovski’s last two goals coming with the man advantage. Seabrook’s goal was a power-play goal for Chicago. The Hawks showed the same sort of grit they had last season when they opened up 21-0-3. They were down 4-3 after Grabovski completed his hat trick but rattled off three straight goals including an empty-netter to post the win.

Niklas Backstrom and Mike Green each added two assists for the Caps. Saad had two helpers to go with his goal and Niklas Hjalmarsson helped twice as well. Both of these teams look to have the offense on display early. It’s only one game so it’s really too early to go much farther in depth on any of the teams we look at here in the first week.

Analysis: Eller had a solid opening night with a pair of goals and an assist on the other for the Canadiens. The game was marred with five fights so it might be worth keeping this in mind when the two teams next get together at the end of November. Montreal enforcer George Parros laid on the ice following a third-period scrap with Colton Orr. Parros was taken off on a stretcher and didn’t return. His status is unknown but bears watching if you were counting on him for PIMs. Reimer has now won four in a row over the Canadiens.

Analysis: Winnipeg defenseman Dustin Byfuglien had a solid opening night in fantasy. He had three assists (one on a power play),  four blocked shots, six penalty minutes and a +1 rating. Fellow blueliner Tobias Enstrom added a pair of assists himself and both look to be good plays on the Jets’ blue line. The Jets were down 4-2 before reeling off three unanswered goals to win the game. That was something you didn’t see much out of the Jets last season–rallies. Hemsky also had an assist and was the lone Oiler with multiple points. In total, 11 Oilers picked up at least a point in this one.

Toronto at Philadelphia 730pm The Leafs open with road games on consecutive nights.

Buffalo at Detroit 8pm The Sabres are the team that welcomes the Red Wings to the East.

Anaheim at Colorado 930pm Another season-opener as we kick off the opening week.