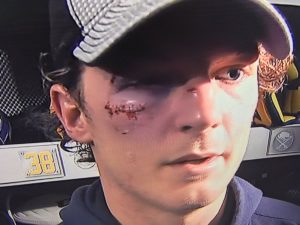 Reid joins me in person from Razzball Hockey Headquarters for Tuesday’s podcast.  We run down the recent injuries, notably Patrik Laine who was destroyed by Jake McCabe (McCabe pictured above from this hit and ensuing scrum).  After the update, we look at the most impactful developments over the last five days.  Among the notables are Patrick Maroon, Michael Grabner and James van Riemsdyk catching fire, the second line for Calgary gets rolling, both Florida teams being a mess and the Islanders losing back to back games to the two worst teams in the league. As always, we close things with The Three Point Challenge.  All of that and more in the latest edition of the Razzball Hockey Podcast brought to you by SeatGeek and FanPicks.com!

Travis Konecny (15.4%) – It hasn’t been consistent but as we talk about on the podcast, I think Flyers-Sabres is a high scoring game.  Getting a piece of the game with Konecny, who remains in the top six, seems ideal.

Sebastian Aho (14.0%) – Columbus is far from an ideal matchup but Aho is on fire right now.  He’s a borderline hold so getting to stream him makes a ton of sense.

Vinnie Hinostroza (0.8%) – He’s still in the top six and a matchup with Detroit is well above average in this set of games.