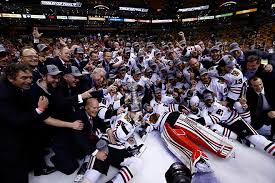 We are ready to go with the 2013-2014 season in the NHL and everyone is at 0-0-0. The first question of the season is who do you have winning the Stanley Cup? Will Corey Crawford and the Hawks repeat? Could Sidney Crosby and the Penguins get back to the top of the mountain? Will the Bruins get to the finals for the fourth time in five seasons? Can Anze Kopitar and the Kings get back to the promised land?

Or is it time for a new contender to emerge?

Here’s a set of recent odds for each team according to the oddsmakers at Bovada in Las Vegas.

Here’s my thought. Chicago is the favorite and I can see why that is. They won it last season and were able to keep their team together for another run. But they won’t repeat.

My pick is the Los Angeles Kings to win the Cup. The last time we played a full 82-game season they took the whole thing. They were one of those teams that was able to turn it on at the right time and rode a big wave of momentum all the way through the playoffs. They dispatched early-round foes quickly in the playoffs. I like the make-up of their team from top to bottom and the goaltending has been solid.

I won’t be surprised to see Detroit come out of the Eastern Conference. Since they moved, it cuts down on their travel which will hep keep them fresh at the end of the season. They also fall into a division with Tampa Bay and Florida and that should make it easier for them to get wins.

Leave your pick in the comments below. We’ll also post a daily question for the first week to get everyone warmed up early in the season. Tomorrow, we’ll take our first guess at the fantasy Art Ross. Who will be the top scorer in fantasy this coming season?