Hello everyone!  Crazy to think that this is year 5 running the hockey side of things here at Razzball.  Now that we’ve reached August, I’ll be posting on a regular basis again getting you prepared for the start of the NHL season, notably your draft(s).  Between now and then, I’ll have sleeper posts, schmohawk (bust) posts, my overall rankings, and an overview of the changes made throughout the NHL since the end of last season.  Additionally, Sven will be providing a team preview on every NHL team, including their prospects.  If there’s anything else that you would like me to cover, please let me know in the comments section below and I’ll be sure to reply to you.  Now, let’s get to the first post of the year!

Andrei Svechnikov was the second pick in the NHL Draft last year and had a nice start to his career, scoring 20 goals and 17 assists in 82 games.  If you look at the general boxscore stats, you don’t exactly see “Future Fantasy Superstar.”  So what makes him a sleeper for this upcoming season?

Stamkos, Skinner, MacKinnon, Laine, Hischier, Svechnikov.  That’s the list of players in the last 10 years to score 20+ goals as an 18 year old in the last decade.  Obviously that’s great company as all of these players besides Hischier have scored 40+ goals in a season.  Let’s take a look at the shot impact that Svechnikov made last season: 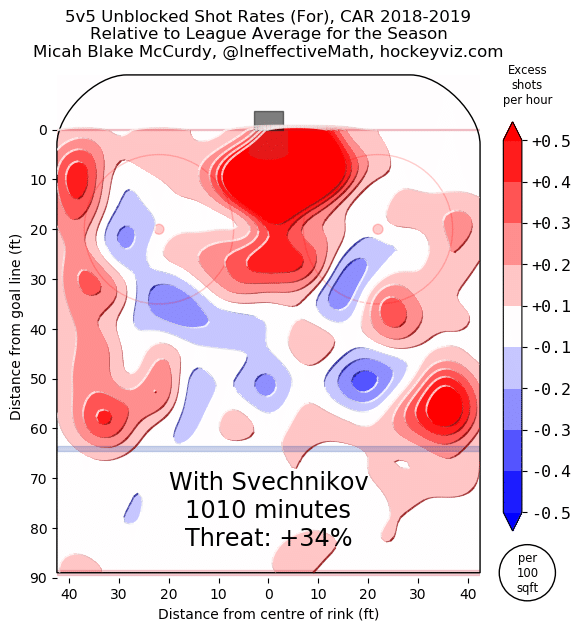 If you’re unfamiliar with these charts, the darker the red, the better.  Look at in front of the net!  In fact, Svechnikov had the largest impact in terms of scoring chances in the entire NHL last season!  At 18!  More than McDavid, more than Kucherov, more than anybody.  So, we have an 18 year old who already flourished offensively, even if the world didn’t really notice.  But there’s more!  Svechnikov only played 14:39 on average last season, a number that is surely going to increase.  With Ferland gone and possibly Williams, there’s an opening on the first line with Aho and Teravainen.  Svechnikov is the clear favorite to take that spot, meaning he’s adding 4-5 minutes of ice time from last season.  Additionally, he barely played on the power play, where he had 0 goals and 5 assists on the season.  There’s no reason for Svechnikov to be off the first unit in year 2.  Svechnikov also had 189 SOG, a strong rate for a rookie, let alone with the limited playing time, and 62 PIM.

So what are we looking at in total here?  I would be shocked if Svechnikov doesn’t top 30 goals this season with a chance to push into the 40’s.  That’s how good he was last year and with a much bigger role and better linemates, combined with natural progression, the sky is the limit.  The usual jump in shot rate from year 1 to 2 could push him past three shots per game, to go along with good to great penalty minutes and hits.  The assists won’t be elite, but they should be decent enough.  NHL.com’s early rankings have Svechnikov at 143rd overall and ESPN has him at 139th.  I haven’t finalized my rankings yet, but I expect Svechnikov to come in somewhere around 50th overall.  The crazy thing is that there’s still plenty of upside from that spot.  I want to own Svechnikov on every team this season before he becomes a early draft pick for the next decade and beyond.