It’s that time of the year guys!  Sure, most people are focused on football drafts right now (check out our stuff here, the guys do a great job), but hockey season is also right around the corner.  I’m getting my rankings out a bit earlier this year to give me more time to slightly adjust if need be, but more importantly, to leave more time to do other preseason posts.  I’ll be following a format closer to what Grey has done with baseball.  You’ll have this top 10 post, a top 20 post, then I’ll be doing forwards in groups of 20, defensemen in groups of 20, followed up by one or two goalie posts.  Once those are wrapped up, I’ll make one big list across all positions that will be easy for you to use during your drafts.  Without further adieu, my top ten players for the upcoming NHL season!

1) Connor McDavid – This will be one of the shortest blurbs of the next two months.  This is like with Mike Trout in baseball; don’t get cute.  McDavid is 21 years old coming of back-to-back 100+ point seasons and has made a huge jump in his shot rate.  He’s the best player who is only going to get better.  Sure, the PIM lag behind most of the other guys in this tier, but just like your sex ed teacher taught you, safety first!  If this doesn’t say safe, I don’t know what does… 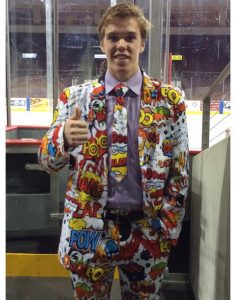 2) Nikita Kucherov – The fun already starts with the second spot, and by fun, I mean difficult decisions.  I’ve been super high on Kucherov compared to consensus the last two seasons (had him 3rd overall last year) so I see no reason to slow down.  He’s elite in four categories, should be in plus-minus, and the penalty minutes are above average.  Tampa should be a powerhouse again in all phases of the game leading me to believe than Kucherov is simply a bit safer than the next couple guys on this list.  He’s still only 25 years old and has managed to improve his game every season in the league.  The only thing that appears to be unsustainable are the 28 power play assists he had last season, but would it shock you if he repeated 36 PPP, just distributed a bit differently with more goals?  It certainly wouldn’t shock me.  There’s a new top Russian for fantasy hockey in the first time in over a decade.

3) Nathan MacKinnon – I really wanted to put MacKinnon second, but eventually settled putting him in third.  The long expected breakout for MacKinnon finally happened when people didn’t expect it.  MacKinnon scored a whopping 97 points in 74 games leading Colorado to the playoffs, which might be more shocking than Vegas making the playoffs.  Before I get to why I have him, let’s just make this a reminder that while I am saying some negatives on MacKinnon, this is extreme nitpicking and there’s a reason why he’s third overall.  My concerns are twofold.  One, he had 55 PIM last season after having 36 in the previous two seasons combined.  Two, he shot the highest percentage of his career despite putting up his largest shot volume.  Now, 13.7% isn’t guaranteed to regress, especially with the amount of high quality chances MacKinnon generates, but he’s only a 9.4% career shooter including last season.  My guess is that we see similar totals for MacKinnon over an 82 game pace instead of the 74 he played last season.

4) Brad Marchand – Marchand is the safest bet on the board to be a six-category stud.  The shot rate is slightly trending in the wrong direction, but it’s still at a well-above average clip.  Everything else is a virtual lock to be elite.  Marchand was a top ten forward last season despite missing 14 games due to injury and suspension, showing you how high his floor is.  He’s a safe bet to be among the league’s best in plus-minus, which is generally hard to predict, but not for Marchand. If he plays 80+ games, he could be the #2 overall forward like he was in 2016-17.

5) Alex Ovechkin – I’m so pumped for Ovechkin to have finally broken through to win the Stanley Cup.  Ovechkin was outstanding last season per usual with 49 goals, 38 assists, and 355 shots on goal.  The shots on goal are the key here because his rate jumped 0.5 shots per game from the previous season.  As long as he maintains the best shot rate in the league, the goals are going to keep piling up.  Add in that he’s missed eight games in the last six seasons combined and we have ourselves a high floor, high ceiling pick.  I’d expect the PIM to jump back into the 50 range as well so while he’ll probably be behind everyone else on this list in assists, The Great Eight will more than make up for it elsewhere.  I wouldn’t have a problem taking him higher than this.

6) Sidney Crosby – I want to put Crosby lower than this, but again, I can’t pass up the high floor at this point.  Crosby started off last season poorly (by his standards) and still finished with 89 points.  He was boosted by the Penguins power play more than usual, as he tallied 38 PPP and recorded a 0 in plus-minus.  Even if the power play points marginally drop, I’d expect a better season at even strength buoyed by a slightly improved shooting percentage from both him and his linemates (his oiSH% was the lowest of his career).  Crosby is still only 30 years old, and the extended offseason after back-to-back Cups can’t hurt.  Lock him in for a point per game and three shots per game with upside from there.

7) Evgeni Malkin – Malkin was an absolute monster last season finishing as the #1 overall forward.  42+56 with 87 PIM, +16, 38 STP, and over three shots per game seems good.  There’s no doubt that Malkin is as good as it gets on a per-game basis.  Last season, we were fortunate enough to get 78 games from Geno.  The problem is that it’s not a realistic expectation given his battle with injuries in the past.  I’d peg Malkin in the 65-70 game range in a random season, which shows you how good that he is given that he’s still seventh on my list.  If you want to gamble early, you could take Malkin as high as second overall and it’s hard to argue with the rationale.  The problem is that the upside doesn’t outweigh the downside of your first pick potentially missing a month or more of the season.  I’d be much more willing to take that shot in roto leagues since it doesn’t matter when you get the production from Malkin.  It’s obviously early and my perspective can change, but I’d really like to have a high pick in drafts this year or to be directly on the wheel… picking 8-11 or so seems rough.

8) Taylor Hall – I’d say year two with the Devils worked out pretty well for Hall.  Another surprising playoff team, the Devils were carried by Hall who won the Hart Trophy.  The Devils did virtually nothing in free agency and while running it back isn’t the end of the world with a young team, they also played over their heads last season.  Is Hall going to put up 37 PPP again when his previous career high was 21?  Probably not.  I think we see a small dropoff in his numbers, but nowhere near enough to keep him out of the first round in drafts.  There’s a chance the numbers repeat themselves with the growth of Hischier, but I’m not sure it’ll make enough of a difference for Hall’s game.  I came into writing this post thinking I’d have Hall lower. possibly outside of the top 10 (barely), but I don’t really like the alternatives.

9) Tyler Seguin – I think this ranking might be a bit controversial given some of the big names behind him, but Seguin was terrific again last season.  He posted 40 goals and 38 assists with over four shots per game.  The Stars power play is great, their system should be modernized with Jim Montgomery taking over behind the bench, and Seguin is in a contract year for those of you who are into that sort of thing.  It wouldn’t shock me at all if Seguin has a season just like MacKinnon and Hall had that elevates him up another level.  Either way, we’re talking a top three shot rate in the league with 75+ points as a floor which I’d take at this point in drafts.

10) Auston Matthews – As mentioned above, I don’t love the guys in these spots.  From Hall (8th) to about 15th on my list, perhaps even more,  the gaps are extremely marginal.  The positives on Matthews?  34+29 in 62 games is strong, he’s only going to be 21 years old when the season starts, and he had only 13 STP last season, a number that should jump with John Tavares in the fold (assuming they play together on the power play which isn’t a given).  The negatives?  He is poor in PIM, the shot rate fell to right around three per game, and I don’t trust Babcock to play Matthews more than 18 minutes per game, especially with a 1-2-3 punch of Matthews-Tavares-Kadri.  This is more of an upside play that Matthews gets his shot rate back to 3.5 per game to cancel out the regression in shooting percentage and that he remains an even strength monster while his power play numbers rise.  Toronto will be very good, but it’s not a guarantee that it leads to more than point-per-game production from their studs.  I have a feeling I’m going to drop him a few spots later on, but for now, Matthews completes my top ten.

That’s all for now guys.  I’ll be back later in the week (probably on Friday) with the rest of my top 20.  As always, feel free to leave any comments, suggestions, or questions below, they’re all greatly appreciated.  Thanks for reading, take care!