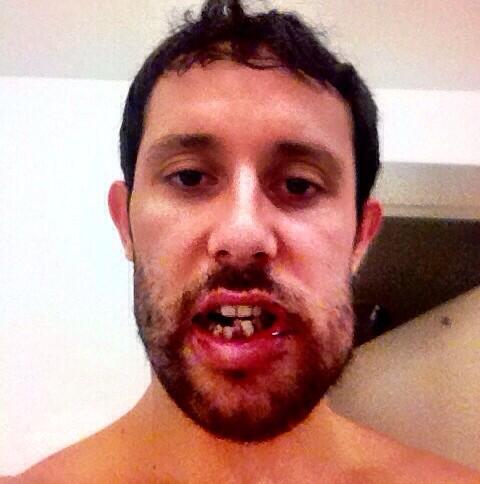 Sam Gagner shows off his broken jaw in a picture from his Twitter feed.

Can someone explain what has been going on this preseason? The NHL resembles “Slap Shot” more and more with some of the outlandish behavior and actions that have gone on.

And it’s only the preseason!

Toronto forward Phil Kessel has a disciplinary hearing this afternoon to discuss his role in a preseason brawl between Toronto and Buffalo on Sunday.

From what we’re seeing, one fight broke out between Jamie Devane and Corey Tropp of Buffalo. John Scott dropped his gloves and went after Kessel right after the first fight started.

Kessel decided not to drop his gloves which is a perfectly justifiable decision. Why on God’s green earth he swung his stick at Scott is beyond me. Kessel picked up a match penalty which keeps him out of all action until Commissioner Gary Bettman hands down his ruling today.

How long will he be suspended for? That’s the million-dollar question. Will it be five games or could it be ten? Either way, Kessel’s fantasy owners will want to watch this today and see how hard the book gets thrown at him.

It impacts his fantasy value as owners have to ask themselves how much less is he worth if he can only, say, play 72 games a year instead of 82? In my mind, it drops him about a round in drafts. His talent is still there but he just won’t be on the ice. The sad thing is that it’s all completely avoidable.

David Clarkson, also of the Toronto Boneheads, was given a 10-game suspension for jumping off the bench to join the Sabres-Leafs brawl. Last season he was a good fantasy player with 15-9—24 and 6 PPG in 48 games. He got a seven-year deal with Toronto and seemed to have the world at his fingertips.

And then he takes his part in the total stupidity known as that brawl. It seems like hockey players would know that the first rule of a fight is to NEVER LEAVE THE BENCH. It doesn’t matter why you do, if you do you’re going to get in trouble with the league. It doesn’t matter what level of hockey it’s in, you just don’t leave the bench.

Look for him to drop a couple rounds in the draft because of the suspension.

Paul Bissonnette of Phoenix also got a 10-game vacation for leaving the bench to join a fight in a preseason game against the Kings. After Rusty Klesla got laid out by Jordan Nolan of the Kings, Nolan was a real easy target.

Of course, it’s Bissonnette’s role to be more of an enforcer type player with little offensive contribution. And I have no problem with him wanting to seek a measure of revenge for Klesla getting laid out. But the sheer stupidity of this is mind-numbing. The game was in Phoenix so the Coyotes had the last line change.

At any point, Bissonnette could have told coach Dave Tippett that he wanted to be on the ice the same time Nolan was. He could have come on the ice for a shift and potentially laid an epic beatdown on Nolan.

Instead, he’s filing to appeal the suspension. But if it stands, he would be eligible to come back on October 24 when the Coyotes…play the Kings in Los Angeles. Anyone wanna guess how many penalty minutes might be handed out in that game if he plays? Over/under 60.5?

In terms of fantasy, his value is pretty much only in PIMs so he’s bets left on the waiver wire.

And then we have Zack Kassian who will be sitting in the press box for the first five regular season games for the Canucks. Kassian didn’t do anything as stupid as anyone above. All that happened with him is his stick clipping the face of Edmonton forward Sam Gagner which resulted in a broken jaw (shown above).

The injury looks totally unintentional but players MUST have control of their sticks at all times. He didn’t and Gagner will be eating Jell-O and protein shakes for 6-8 weeks. Gagner will be missed as he had 14-38—52 in 48 games with the Oilers last season and it impacts their top couple lines and their power play.

Gagner is still worth drafting and Kassian will be treated with a little more nervous looks from fantasy owners after this incident. It wasn’t the way he wanted to start the season after 11 points in 39 games last season.